It is estimated that 31% of households in the UK have a dog and an estimated £21 million a year is spent by councils cleaning up dog poop. Dog poop is not only costly in a financial sense but it is also costly to the environment – not to mention the cost to human health and well-being. Man’s best friend comes with many responsibilities, one of which is managing your pet’s waste.

Order Online With Us Today

Irresponsible dog owners failing to clean up their dog poop continues to be the issue that results in the highest number of complaints to local authorities. Some councils have employed private detectives to try to reduce the problem. Most local councils issue on-the-spot fines to dog owners who are caught failing to remove their dog’s poop from a public place. There really is no excuse these days because of the many receptacles that councils have situated along public paths and in parks and other public areas. Some local councils are going to great lengths to try to shame the public into using dog poop bags. The minority are at risk of spoiling the joy of walking our dogs in public places because many bans have been initiated due to the nuisance that dog poop causes. Therefore, local councils have felt the need to act. Many beaches have had to close due to dog poop causing not only a nuisance, but causing danger and harm to the ecosystem. What most dog owners don’t realise is that dog poop left on the beach will be washed away by the tide, but it ultimately causes a chemical imbalance which kills fish and encourages algae growth. Authorities have had to act by declaring the beaches unsafe due to the increased levels of bacteria found in the water and it may take many years before the beach is safe once again. Many dog owners bag their dog’s excrement but then leave the bag on the beach and this is a huge problem at the moment. It should be discarded safely in the bins provided along the coast line because leaving the poo bag on the beach can be more dangerous to health and the environment than not bagging it at all.

The Benefits of Dog Poop Bags

•Convenience – Carrying a shovel or a spade around with you isn’t exactly convenient, but carrying a few dog poo bags in your jacket pocket certainly is. Most bags are textured to make them easy to open so all you need to do is … Grab it, Bag it and Bin it!
•Cost effective – You can now purchase a variety of dog poop bags which are extremely cost effective, especially when purchased in bulk. Ordering online couldn’t be easier and they will be promptly delivered to your door with no hassle.
•Prevents the spread of illness and infection – Faecal matter is not sanitary and can carry a wide variety of diseases which can be passed to humans and other animals if it’s not disposed of safely. These include tapeworms and other parasites, as well as E.coli.
•Good for the environment – Truly responsible dog owners are now using degradable or biodegradable dog poop bags which will decompose within months rather than the basic plastic bags which can take thousands of years to decompose and also emit dangerous chemicals which are harmful to the ecosystem. The biodegradable bags are becoming increasingly popular because they are eco-friendly, as well as still being economical to buy.
•Common courtesy – There is absolutely nothing worse than accidentally stepping in dog poop and it’s even more infuriating these days when you know that dog poop bags are so easily accessible to the dog owning public. 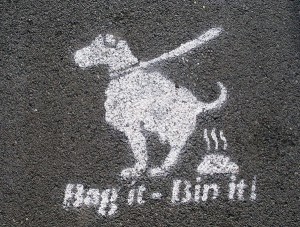 •Grab It – Keep plastic poop bags close to the door or near the lead. One handy tip is to tie a plastic bag around the handle of the dog’s lead so you cannot help but keep one with you at all times. Insert your hand inside the bag and pick up the dog’s poop. It’s not as bad as you might think. Buy opaque bags so you cannot see what’s inside and once it’s inside and after you have secured the top it will be odourless.
•Bag It – Turn the bag inside out to bag the dog’s mess.
•Bin It – Dispose of it in a ‘Poop Bin’ or even a public bin if a dog waste bin is not around. Some dog owners believe this isn’t allowed, but it is.

See our full range of Eco dog poop bags Standard bags and Premium extra thick bags in our online shop and be a responsible dog owner.

Thank you from the Scot-Pet Shop Team

Payments are in GBP POUNDS STERLING £

We use cookies on our website to give you the most relevant experience by remembering your preferences and repeat visits. By clicking “Accept All”, you consent to the use of ALL the cookies. However, you may visit "Cookie Settings" to provide a controlled consent.
Cookie SettingsAccept All
Read More
Manage consent

This website uses cookies to improve your experience while you navigate through the website. Out of these, the cookies that are categorized as necessary are stored on your browser as they are essential for the working of basic functionalities of the website. We also use third-party cookies that help us analyze and understand how you use this website. These cookies will be stored in your browser only with your consent. You also have the option to opt-out of these cookies. But opting out of some of these cookies may affect your browsing experience.
Necessary Always Enabled
Necessary cookies are absolutely essential for the website to function properly. These cookies ensure basic functionalities and security features of the website, anonymously.
Functional
Functional cookies help to perform certain functionalities like sharing the content of the website on social media platforms, collect feedbacks, and other third-party features.
Performance
Performance cookies are used to understand and analyze the key performance indexes of the website which helps in delivering a better user experience for the visitors.
Analytics
Analytical cookies are used to understand how visitors interact with the website. These cookies help provide information on metrics the number of visitors, bounce rate, traffic source, etc.
Advertisement
Advertisement cookies are used to provide visitors with relevant ads and marketing campaigns. These cookies track visitors across websites and collect information to provide customized ads.
Others
Other uncategorized cookies are those that are being analyzed and have not been classified into a category as yet.
SAVE & ACCEPT